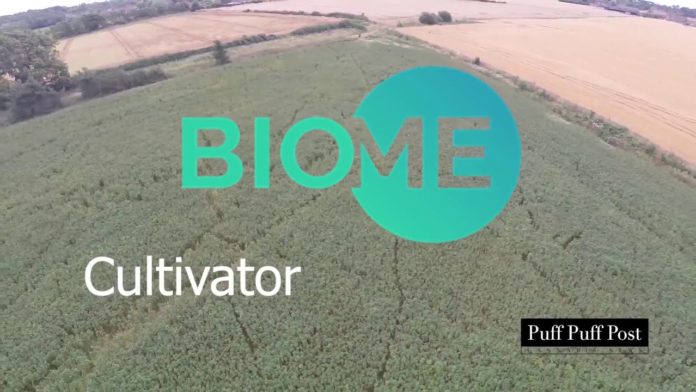 Vancouver, B.C., October 3, 2018 – Biome Grow Inc. (formerly Orca Touchscreen Technologies Ltd.) (the “Company” or “Biome”) is pleased to announce the completion of its previously announced three-cornered amalgamation transaction (the “Transaction”) with Cultivator Catalyst Corp. (“CCC”) and 1151856 B.C. Ltd. (“Orca Sub”). Pursuant to the amalgamation agreement dated April 25, 2018 among the Company, CCC and Orca Sub (“Amalgamation Agreement”), the Company indirectly acquired all of the issued and outstanding securities of CCC in exchange for securities in the capital of the Company, constituting a “fundamental change” of the Company within the meaning of the policies of the Canadian Securities Exchange (the “Exchange”). In connection with the Transaction, the Company changed its name to “Biome Grow Inc.” and consolidated its common shares (“Common Shares”) on the basis of one post-consolidation Common Share for each 50 pre-consolidation Common Shares, together with a corresponding and equal consolidation of the Company’s issued and outstanding common share purchase warrants. The Exchange issued its conditional approval of the Transaction on August 22, 2018. It is expected that the Company’s Common Shares will resume trading on the Exchange under the new symbol “BIO” on Tuesday, October 9, 2018, after the Exchange’s conditions for listing are satisfied and the Exchange issues its final bulletin confirming completion of the Transaction.

On October 3, 2018 (the “Closing Date”), the Company completed the Transaction pursuant to the Amalgamation Agreement and acquired all of the issued and outstanding common shares and special class C shares in the capital of CCC by way of a three-cornered amalgamation.  In connection with the Transaction, CCC common shareholders received five Common Shares for each common share of CCC held and the sole CCC special class C shareholder received one special class C share in the capital of the Company (the “Special Class C Shares”), resulting in an aggregate of 106,164,475 Common Shares and one Special Class C Share being issued to former CCC shareholders. In addition, all of the outstanding common share purchase warrants of CCC were exchanged for common share purchase warrants of the Company on a five-for-one basis and on substantially similar economic terms and conditions as previously issued. Following the completion of the Transaction CCC is now a wholly-owned subsidiary of the Company. The Company will conduct the principal business of CCC, as described in greater detail in the Listing Statement (hereinafter defined).

A listing statement describing the Company and CCC, as well as the terms of the Transaction, prepared in accordance with the policies of the Exchange, is available on SEDAR at www.sedar.com (the “Listing Statement”). The summary information set out herein is qualified in its entirety by the Listing Statement.

The Company currently has a total of 107,317,729 Common Shares and 1,439,732 Common Share purchase warrants outstanding. The Company also has issued and outstanding options with an aggregate value of $200,000 (as further described in the Listing Statement). As of the Closing Date, 61,142,505 Common Shares are subject to escrow pursuant to the policies of the Exchange and will be released from escrow in accordance with the terms of the respective escrow agreements.

New Board and Management

Factors that could cause the actual results to differ materially from those in the forward-looking statements include, failure to obtain the final approval of the Exchange, among other factors.

The forward-looking statements contained in this press release are made as of the date of this press release.  Except as required by law, the Company disclaims any intention and assumes no obligation to update or revise any forward-looking statements, whether as a result of new information, future events or otherwise.  Additionally, the Company undertakes no obligation to comment on the expectations of, or statements made by, third parties in respect of the matters discussed above. The Exchange nor its Market Regulator (as that term is defined in the policies of the Exchange) does not accept responsibility for the adequacy or accuracy of this news release. The Exchange has in no way passed upon the merits of the proposed Transaction and has neither approved nor disapproved the contents of this news release.