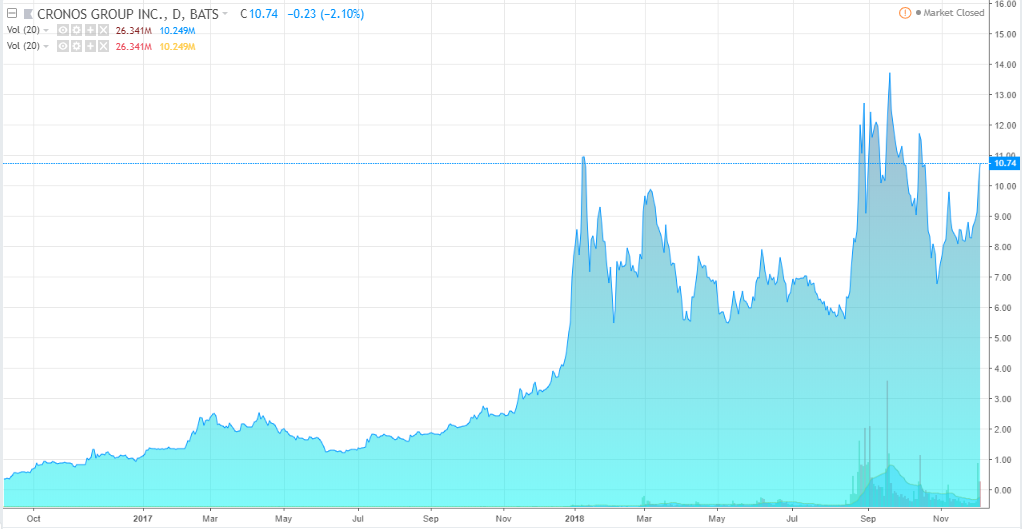 (Note, this was written before Cronos confirmed that it is engaged in discussions concerning a potential investment by Altria Group Inc. (MO) (“Altria Group”) in Cronos Group. No agreement has been reached with respect to any such transaction and there can be no assurance such discussions will lead to an investment or other transaction involving the companies. Published 8/30/18 @ $9 down $3 the same day.)

Citron has a hot hand in cannabis lately. First Aurora ($ACB) and then in the last two weeks our trading calls played out to 70% returns. One long and one short (respectively: $TLRY and $CVSI).

An Aside to Investors

Citron would like to inform investors of caution on the ongoing and real green rush. Although the hype is big and the prohibition after 100 years is real, it is critical to understand that in the Canadian landscape, there are over 100 licensed producers and there will ultimately be more losers than winners.

While Canadian growers get ready for October 17 and the new age of recreational marijuana usage in Canada, Citron believes that there are a few truths that need to come to light with regards to Cronos.

The Great Deception in Process

Cronos management appears to have been deceiving the investing public by purposely not disclosing the size of its distribution agreements with provinces – unlike every other major cannabis player.

Our sources have informed us that it’s because the agreements are so small they could never justify the premium investors are paying for the stock.

Some may argue that US listed cannabis stocks are subject to stricter regulation so companies are much more careful with what they disclose but both Canopy Growth (NYSE:CGC) and Tilray (NASDAQ:TLRY) are much more forthright.