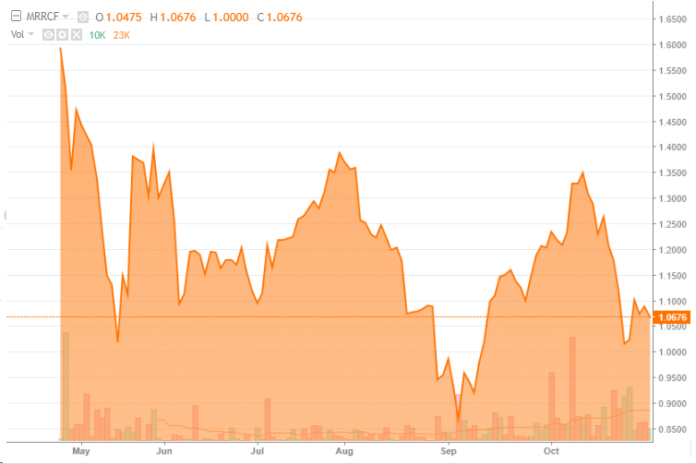 TORONTO, Ontario, October 27, 2017 – Maricann Group Inc. (CSE:MARI) (OTCQB:MRRCF) (FRANKFURT:75M) (“Maricann” or the “Company”) is pleased to announce the closing of its previously announced (i) private placement offering
(the “Offering”) of convertible debenture units (the “Convertible Debenture Units”) to

raise $31 million; and (ii) acquisition (the “Acquisition”) of 100% of the issued and outstanding shares of NanoLeaf Technologies Inc. (“NanoLeaf”), a biotech company
with licensing rights to patented nano-technology for ingestible cannabinoid delivery
called VESIsorb®.

All securities issued pursuant to the Offering are subject to a statutory hold period of four months and one day, expiring on February 28, 2018.

In connection with the Offering, Maricann has agreed to increase the size of its board to facilitate the nomination of two independent directors commencing at its next annual meeting of shareholders. A lead investor in the Offering has been granted a right to nominate one of the independent directors for election on the board of the Company, which right will survive until the earlier of (i) the maturity date of the Convertible Debentures, and (ii) such time as the lead investor does not, directly or indirectly,
hold a minimum of $1,000,000 principal amount of Convertible Debentures.

Maricann announced on August 22, 2017 that it had entered into an agreement to purchase 100% of NanoLeaf, a biotech company with licensing rights to patented nano-technology for ingestible cannabinoid delivery called VESIsorb®. Maricann intends to work with Vesifact AG, the producer of VESIsorb®, to apply the VESIsorb® technology to Maricann’s products.

“VESIsorb® is a proprietary delivery system which improves solubility and absorption in other fat soluble pharmaceuticals and nutraceuticals. We believe further testing will indicate the same improvement in absorption for cannabinoids, and that the VESIsorb® technology will form the core element of our advanced cannabinoid delivery platform” said Ben Ward, Maricann’s CEO. “We are therefore very pleased to incorporate NanoLeaf and its team into Maricann as we position ourselves to capitalize on increased consumer appetite for ingestible cannabis while also creating a better brand, all with the goal of enhancing shareholder value.”

In connection with the Acquisition, NanoLeaf shareholders received $38.5 million in consideration for their NanoLeaf shares, satisfied by delivery of approximately 18.3 million common shares of Maricann (the “Closing Shares”) at a deemed value of $2.10 per share (subject to adjustment as described below). Maricann also loaned NanoLeaf $1.6 million in cash to settle existing liabilities of NanoLeaf in advance of completing the Acquisition, resulting in deemed total transaction consideration of $40.1 million.

The number of common shares issued to NanoLeaf shareholders in connection with the Acquisition is subject to adjustment in certain circumstances following closing, including if, on the date that is 179 days post-closing (the “Adjustment Calculation Date”), the volume weight average price of Maricann common shares for the preceding 20-day period (the “Adjustment VWAP”) is less than $2.10, the Company will issue incremental shares to the NanoLeaf vendors (“Adjustment Shares”) in accordance with the following formula:

The Adjustment VWAP is subject to a minimum of $1.40 per Maricann share, resulting in a maximum number of Adjustment Shares of approximately 9.2 million. For more information on the terms of the acquisition, please refer to the Share Purchase Agreement between Maricann and the NanoLeaf shareholders date August 21, 2017, which has been filed under Maricann’s profile on www.sedar.com.

The securities being offered pursuant to the Offering have not been, nor will they be, registered under the Securities Act and may not be offered or sold in the United States or to, or for the account or benefit of, U.S. persons absent registration or an applicable exemption from the registration requirements. This news release will not constitute an offer to sell or the solicitation of an offer to buy nor will there be any sale of the securities in any State in which such offer, solicitation or sale would be unlawful.

Maricann is a vertically integrated producer and distributor of marijuana for medical purposes. The company was founded in 2013 and is based in Toronto, Canada and Munich, Germany, with production facilities in Langton, Ontario, Canada where it operates a medicinal cannabis cultivation, extraction, formulation and distribution business under federal licence from the Government of Canada. and Dresden, Saxony, Germany. Maricann is currently undertaking an expansion of its cultivation and support facilities in Canada in a 217,000 sq. ft. (20,159 sq. m) build out, to support existing and future patient growth.

For more information about Maricann, please visit our website at www.maricann.ca