A Canadian love-fest for Florida pot companies continues to blossom with a $93 million deal that includes a Ruskin-based grower yet to begin selling marijuana products. 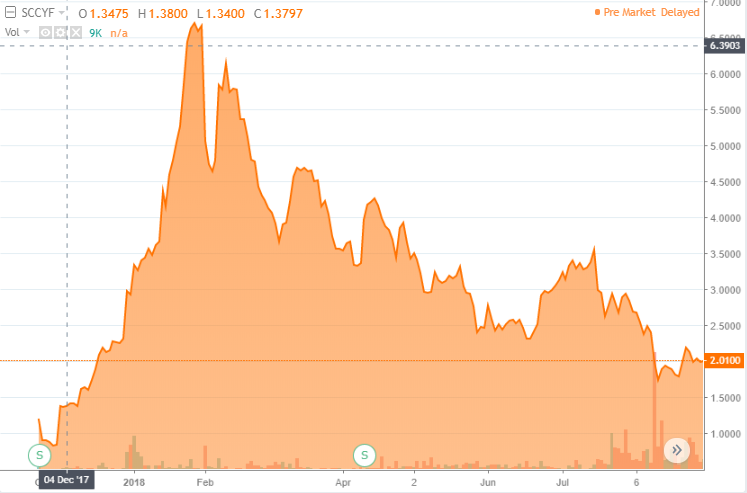 Toronto-based Scythian Biosciences Corp. announced Monday it intends to purchase a company that will take over the grower 3 Boys Farms, which received a highly sought-after medical marijuana license in August 2017 after suing the state. The deal also includes purchasing an unnamed “health care organization” as part of Scythian Biosciences’ entry into the booming U.S. cannabis market.

In a letter to health officials in July, 3 Boys asked for nearly nine-month extension before it begins dispensing medical marijuana products to patients. Under Florida law, “medical marijuana treatment centers” are supposed to have products on the shelves 210 days after being authorized to begin cultivating cannabis. The Ruskin-based grower got the go-ahead to begin cultivation in January and faced a July 31 deadline to begin dispensing.

Under the agreement announced Monday, CannCure will buy 60 percent of 3 Boys and 60 percent of the unnamed health care organization. Scythian will eventually purchase CannCure. The deal, if approved by state health officials, is expected to close in October, and will be Scythian’s first U.S. investment, according to CEO Robb Reid.

“With only 13 licenses (issued) and 21 million people, we feel that it is perhaps the single most important opportunity in the United States,” Reid told The News Service of Florida in a telephone interview Monday from London.

Reid compared Florida’s “emerging market” with that of Canada, which has more than 200 licensed marijuana operations and a population of 40 million people, or about double that of the Sunshine State.

“You can figure that up very quickly. The numbers add up. Thirteen licenses to serve that population. … That’s a market we want to be in,” he said.

The Scythian-3 Boys deal is the latest indication of the skyrocketing value of Florida’s highly restricted medical marijuana licenses in what some investors estimate will be a $2.5 billion market by 2025.

Last month, California-based MedMen announced it was purchasing Treadwell Nursery, which operates as “Remeny Wellness,” for $53 million. The agreement gave MedMen, a high-end brand which has dispensaries in Beverly Hills and Las Vegas, the right to operate 25 dispensaries throughout the state, the maximum currently allowed under Florida law, along with Treadwell’s five-acre cultivation facility in Eustis.

The high price tag on the 3 Boys deal, however, includes the purchase of the unidentified “healthcare organization,” described in the announcement as being established in 1991 and having six locations throughout Florida.

As part of the deal, the organization plans to roll out 12 additional centers over the next two years, “including the acquisition of primary care practices/groups, which will substantially increase the group’s patient base statewide.”

The Legislature first legalized non-euphoric medical marijuana in 2014 and ordered health officials to issue five licenses to cannabis operators. The number of state-mandated licenses has grown since the passage in 2016 of a constitutional amendment broadly legalizing medical marijuana but has remained limited. Health officials have issued 13 licenses and have laid out the framework for an additional four. Future licenses are tied to increases in the number of eligible patients, now at just over 100,000.

Prior to this winning the license, the Florida farm were growers of USDA-certified organic vegetables, herbs, and fruit. Their seed-to-table product safety methods consistently received top scores in the third-party audits required for product traceback and food safety certification.

The original report on Sun Sentinel.