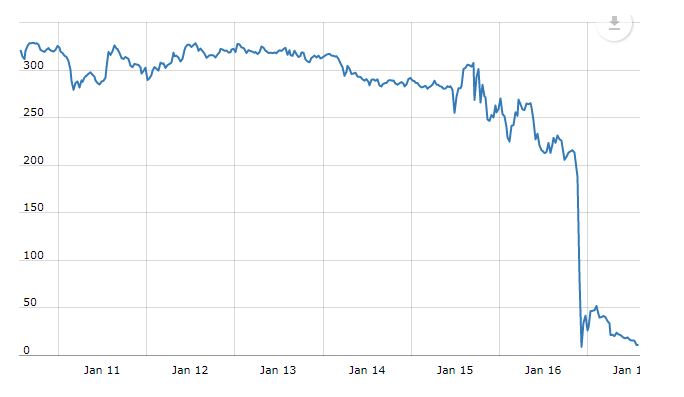 At 9:20 pm last night, BitConnect, once the 7th largest cryptocurrency in the world, was trading at a sedate $197 per coin. It had been an impressive run for the cryptocurrency, which after being launched in November 2016, had hit a market capitalization of over 2 billion dollars (Rs. 13,000 crore). But an hour later, by 10:10 pm, everything had been wiped out — BitConnect was trading at a mere $9.

There was much shock and anger in the BitConnect community. “This is a bad joke, right?,” wrote user ProHardGamer on the BitConnect subreddit. “I’m ruined. I’m really fucking ruined. All my life’s savings were in BCC. $80,000 gone like nothing?,” he added. Other posters echoed his thoughts. “I lost $40,000,” wrote user WoahJack. Some users posted Suicide Prevention Links. Moments later, the subreddit went offline, disappearing from the internet forever.

The crypto community is no stranger to crashes, but BitConnect’s crash has hit people harder than most. BitConnect’s crash seemed particularly final, because BitConnect, the platform that issued BCC, announced it was shutting down, sending the value of BCC spiraling downward. The reasons for the shutdown, as mentioned in a hastily-written blogpost on its site, were FUD (Fear, Uncertainty, Doubt) created by the people who’d called the company a scam, and two cease-and-desist letters sent by Texas and North Carolina’s securities boards.

It’s not surprising that government agencies had become uncomfortable with how BitConnect operated. BitConnect called itself a lending platform, in which users could lend out their money to earn some handsome returns. The platform promised guaranteed returns of up to 40% per month. Users putting their money into BitConnect could thus triple their money in 299 days — an investment of Rs. 1 lakh would’ve given a guaranteed return of Rs. 2.3 lakh in 10 months.